Your Clinic Has Finally Reached Page 1 In Google, Now What:
The Hidden Bonus And the 2 traps of Being At The Top Of Google

That feeling you get after all the hard work and time you put into getting to the top and you have finally made it to the top 3 in Google ie., 1st page.

But what happens now? One really, really good thing and 2 bad things.

Here's how people click and behave online. It's called the golden triangle.

But what does that mean for you?

It means you get to experience the power of the exponential.

You get exponentially more:

In the grand scheme of things, there isn't much traffic for a new dentist. It's consistent but there just isn't a lot of it. The traffic ebbs and flows with the seasons, but it's small compared to other traffic. That's why it is so important that you fight to get positioned in the golden triangle.  The majority of views and clicks occur here. 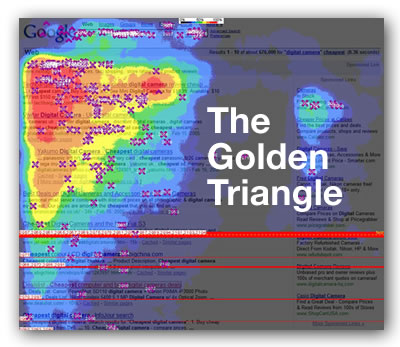 This is how I've been able to get so many consistent new patients calls across over a decade with my clinics, getting and staying in the golden triangle.

What clinics don't anticipate is that there would be a downside to this.  In fact, there are 2 so called traps, especially during / after this pandemic.

When some clinics hit number 1 or 2 or 3 (all of which land you on page 1 of Google), they think their job is done. However, it's just started. Think about it from the patient's perspective. Your basically in front of their face now, but when you open your mouth to talk to them, what do you say? That's right, you need an incentive to 'convert' the traffic to calls for booking and such.

So clinics that give up here are guilty of complacency. The converting clinic gets more bookings.

Imagine you were Justin Bieber before you got famous. Well, no one is paying attention to you. But a few Youtube videos and getting scouted by Usher and Justin Timberlake have now catapulted your way into the spotlight. All eyes are on you, you get all the attention and all the calls for gigs and movies and music collaborations and merchandising and so on.

What could go wrong?

Not all that attention is good. You have other musicians that are jealous and try to undermine your success. You have paparazzi all over you trying to film you screwing up or in private moments so people will buy their gossip rags. You have some crazy fans that think you are a god and they stalk you and build elaborate shrines to your very existence (actually, who doesn't want a shrine built of them?).

Ok, it's not so bad for dentists.  But there is professional jealousy where other dentists write you a bad review or complain to the College about you. There are more sales people and vendors that intrude on your life, and you will get more crazy people trying to join your clinic.

Sometimes staff don't know how to deal with those 5-10% of cases and it messes up their day as it can be emotionally taxing.  Once you get to this level, it's quite simple to put in protocols to help reduce those numbers and training for staff to deal with them.

In the end, some dentists are happy with just a small amount of new patients per year but others are sensitive to "the push" some clinics are making to get to the top and stay there.

But if you want to get to the top or at least recapture your fair share of patients but aren't doing so out of fear, that's a different story. It's like people that say they don't want to make more money because they will have to pay more in tax. They don't understand how the system works and make their decisions on fear.

What decisions do you want to make for the future of your clinic?

Please log in again. The login page will open in a new tab. After logging in you can close it and return to this page.